As analytics departments across Major League Baseball have gotten access to better tracking system data over the past decade, the use of the shift has skyrocketed across the league. The idea of the shift is that by positioning fielders where batters most frequently hit their balls in play, the fielding teams can attempt to limit the amount of balls hit in play that fall for hits. While overall use of the shift has increased significantly across the league, teams still shift at much different rates and shifts are much more common against left-handed batters than right-handed batters. 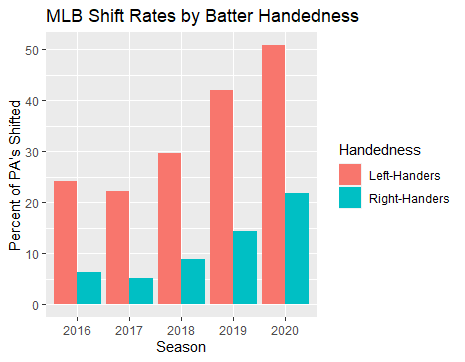 Even though the use of the shift has been rising for a while now, the 2020 season was the first year that there was a somewhat significant decrease in league wide BABIP (batting average on balls in play). We can see this by plotting the league BABIP over the time period where shifts have become much more common. 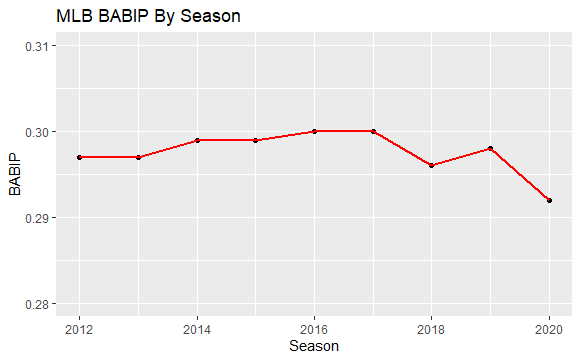 So how effective is shifting overall and has it finally reached a level of use where it is finally having a noticeable effect on league wide BABIP? Are there other potential factors that caused this decrease in league wide BABIP this season?

For simplicity, the primary focus of this series will be infield shifts and thus it would be a good idea to consider how shifting is affecting BABIP for ground balls. By doing this, we can begin to develop a better understanding of some of the effects the shift is potentially having.

Even though looking at the league BABIP as a whole didn’t show much other than the decrease over the last couple seasons, we can see by looking at BABIP for ground balls that the rising number of shifts is definitely having an effect. This certainly makes sense and it likely isn’t a coincidence that the only season where the BABIP for ground balls increased was also the only year in this time period where the shift usage decreased across the league. While the infield shift is definitely having an effect on the BABIP for ground balls, we can begin to understand if batters are changing their approach at the plate the more accustomed they get to facing shifts by looking at data from Fangraphs. At Fangraphs, fielding alignment is broken down by no shift, traditional shifts and non traditional shifts. We can begin by looking at the rate in which batters are pulling the ball against each of these types of fielding alignments throughout the years.

It doesn’t appear that as Major League batters are getting more accustomed to seeing the shift that they are changing the rate at which they pull the ball. In fact, hitters have actually been pulling the ball more frequently against what Fangraphs defines as both traditional and non-traditional shifts over the past few seasons.

A Statcast pitch-by-pitch database can be utilized to better understand the effects the increased rate of shifts across the league is having on hitters’ approaches and the overall impact of shifts on league offensive production. Statcast has different breakdowns of fielding alignment and they break it down by standard defensive alignment, shifted and strategic alignment. We can use these classifications to better break down how batters might be changing their approach at the plate against each alignment and we can begin to do this by calculating average launch angle against each of these infield alignments. 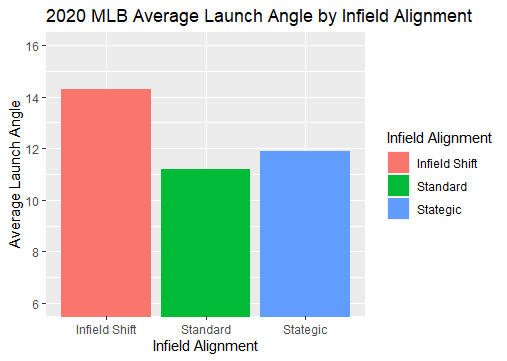 When facing what Savant defines as an infield shift, the average launch angle for all batted balls in play from 2020 was much higher than against a standard infield alignment. It should also be noted that the strategic infield alignment also looks like it had a slight influence on average launch angle for all batted balls hit into play in 2020. Fly balls and line drives are generally going to lead to better results than ground balls are and thus an increase in average launch angle (up to a certain point) is generally going to lead to better overall offensive production. The pitch-by-pitch database can also be used to calculate average exit velocity against each alignment, which was also up slightly against the infield shift compared to the other alignments this year, though the shifts influence certainty isn’t as noticeable here.

Since going the other way to beat the shift against Major League pitching isn’t as easy as many make it out to be and we have previously shown that shifts are not having an influence on the rate of which batters are pulling the ball, hitters are likely compensating for these facts by simply hitting the ball over the shift.

While it is certainly interesting that average launch angle is up against infield shifts compared to standard infield alignment, there are certainly other methods one can use to try to determine if shifts are actually an optimal defensive strategy for teams to employ. The Statcast pitch-by-pitch database can be further utilized to calculate the wOBA against each of Statcast’s infield alignments. 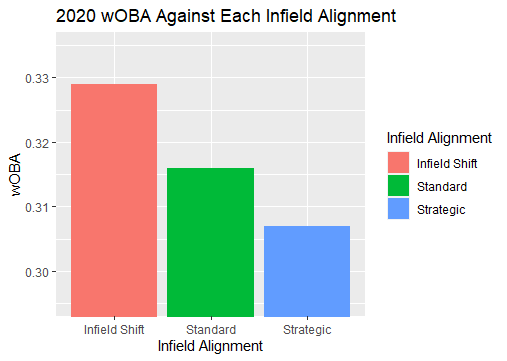 We can see that the wOBA against infield shifts was much higher than it was against standard infield alignment this season. Since we have previously shown that the average launch angle against the shift was up this season, the shift may be causing hitters to hit for more power and thus increasing wOBA for hitters when facing the shift.

Despite many claims that use of the shift across the league has gotten out of hand and the calls for the league to ban the shift, there is evidence presented here that tells us it isn’t having as much of an impact as many believe and that the shift may actually be causing hitters to drive the ball in the air more and they are hitting for more power as a result. This is certainly interesting but we have previously shown that league BABIP has only decreased the last couple seasons. In part 2 of this series, we will go through previous seasons to begin to determine if something has changed about batters’ approaches at the plate as they have become more accustomed to facing the shift and explore some individual hitters in an attempt to better determine the influences the shift is having.